i am patient zero and i am not in the sealed off red zone.

Is it possible that god is still evolving? Some physicists and mathematicians and people working on quantum computers speculate that at some point in the future, it may be possible for an intelligence to exist which no longer resides only in mortal bodies and finite minds but in other ways, perhaps immaterial, or somewhere in between material and immaterial, in a quantum state between one and zero, outside of time. And perhaps this infinite, all encompassing Mind would be able to retrospectively create the world we all know and love, or not, in seven days, as well as everything in the ten to the power of five hundred universes and the eleven dimensions.

Reductionists who complain about me repeatedly referring to the ten to the power of five hundred universes and the eleven dimensions in my book (“…he professes an interest in quantum mechanics as a way of re-imagining reality, yet does not give even the most cursory articulation of the scientific theory. On the other hand, his frequent mention of the ten to the power of 500 universes and eleven dimensions makes you want to scream.” link) can be grateful I didn’t choose to speak in terms of the 196,883 dimensions and the 808 sexdecillion or so symmetries, as some mathematicians are won’t to do.

I was inspired to think about the im/possibility of god in this way because of the death of the author of Infinite in All Directions, Freeman Dyson at age 97 1. Dyson was one of those scientists adherents of scientism love to hate. He was even described in one obituary as ‘a practitioner of scientific theology’.2

i also have a new about page. but it’s there not here. 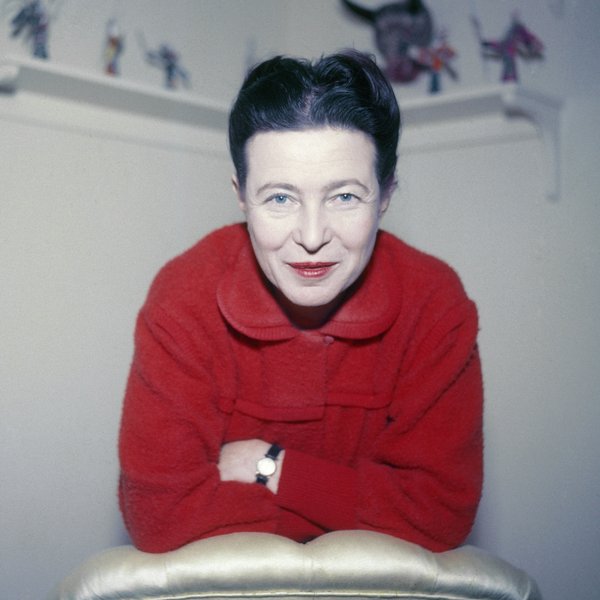 an unusual picture of simone de beauvoir taken in 1955. most photographers show her as quite severe but here, you are 3 and she is your favourite aunt who is going to read to you.
which story would you like?
— une mort très douce, please auntie!
oh but i haven’t written that yet…
— fuck! where is my time machine?